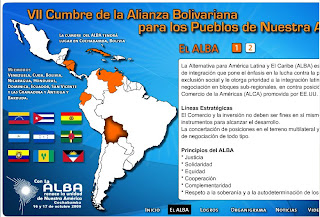 THE dollar could be sidelined by a new currency for Latin America, following a summit held over the weekend.
Says an article from World War 4 Report: "The seventh summit of the Latin American anti-imperialist bloc ALBA concluded Oct. 17 in Cochabamba, Bolivia, with resolute support for ousted Honduran president Manuel Zelaya, strong opposition to planned US military bases in Colombia—and an agreement to form a new international currency to make the region less dependent on the dollar. The new currency, named the sucre after José Antonio de Sucre, who fought for South America's independence alongside Simon Bolívar, is slated to be issued in coin form in 2010.
"In a resolution on Honduras, ALBA members agreed "to apply economic and commercial sanctions against the regime that came to power as a result of a coup." The alliance called on the international community to reject the presidential election planned by Honduras' de facto government next month.
"The statement also said rejected the "installation of military bases of the United States in Latin America and the Caribbean," saying they "endanger the peace, threaten democracy and facilitate the hegemonic interference" of the US in the region's affairs. "The government of Colombia must reconsider the installation of these military bases," the statement said. Venezuelan president Hugo Chávez added that the planned bases are a "threat to all of us."
"The meeting also decided that the next ALBA summit be held in Cuba in December. ALBA's member states are Venezuela, Bolivia, Cuba, Ecuador, Nicaragua, Honduras, Dominica, Saint Vincent and Antigua & Barbuda. Honduras was represented by Patricia Rodas, foreign minister of the ousted Zelaya government."
Posted by The Vast Minority at 01:27