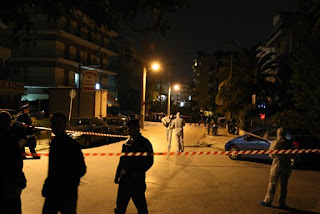 RESISTANCE fighters in Greece have carried out a spectacular attack on a police station in Athens.

Said a report from Associated Press: "The attack occurred after Greece's new Socialist government promised to crack down on anarchist and far-left militant groups that have stepped up bombings and shootings in the wake of riots in Athens and other cities in December.
"Two officers were seriously wounded in Tuesday's shooting, which occurred at 9:40 p.m. (1840 GMT, 2:40 p.m. EDT) in the Agia Paraskevi area, north of the Greek capital, police said. Four other officers were hospitalized with less serious injuries, while a bystander was treated for shock, state hospital officials said."
Two men on a motorcycle stopped and opened fire on police officers standing outside the station before driving away. The gunmen fired about 50 shots, authorities said.
Officers from the police's anti-terrorism division gathered evidence at the targeted police station, while police stopped and searched vehicles across northern Athens - but failed to find the militants.

Last December police murdered teenager Andreas Grigoropoulos in Athens, bringing to a head years of tension and unleashing popular fury against the corrupt capitalist regime, which seems to have changed little since the 'socialist' election victory.
Posted by The Vast Minority at 02:13