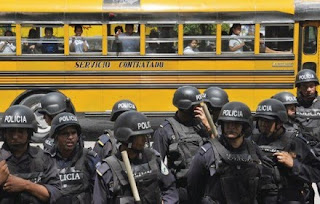 HE MAY have won the Nobel Peace Prize, but Barack Obama is planning a new war - against rebel states in Latin America.

That's the warning from veteran journalist and author John Pilger in his latest article in the New Statesman.

Writes Pilger: "The Nobel Peace Prize-winner's latest war is largely secret. On 15 July, Washington finalised a deal with Colombia that gives the US seven giant military bases. "The idea," reported the Associated Press, "is to make Colombia a regional hub for Pentagon operations . . . nearly half the continent can be covered by a C-17 [military transport] without refuelling", which "helps achieve the regional engagement strategy".
"Translated, this means Obama is planning a "rollback" of the independence and democracy that the people of Bolivia, Venezuela, Ecuador andParaguay have achieved against the odds, along with a historic regional co-operation that rejects the notion of a US "sphere of influence". The Colombian regime, which backs death squads and has the continent's worst human rights record, has received US military support second in scale only to Israel. Britain provides military training. Guided by US military satellites, Colombian paramilitaries now infiltrate Venezuela with the goal of overthrowing the democratic government of Hugo Chávez, which George W Bush failed to do in 2002.
"Obama's war on peace and democracy in Latin America follows a style he has demonstrated since the coup against the democratic president of Honduras, Manuel Zelaya, in June. Zelaya had increased the minimum wage, granted subsidies to small farmers, cut back interest rates and reduced poverty. He planned to break a US pharmaceutical monopoly and manufacture cheap generic drugs.

"Although Obama has called for Zelaya's reinstatement, he refuses to condemn the coup-makers and to recall the US ambassador or the US troops who train the Honduran forces determined to crush a popular resistance. Zelaya has been repeatedly refused a meeting with Obama, who has approved an IMF loan of $164m to the illegal regime. The message is clear and familiar: thugs can act with impunity on behalf of the US."
Posted by The Vast Minority at 01:08