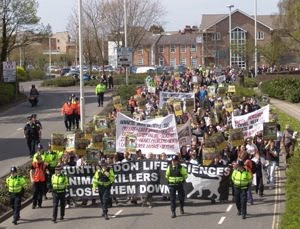 PHARMACEUTICAL giant Novartis has been foiled in a legal bid that would have imposed severe restrictions on protesters and set a frightening legal precedent.

Said a report on Indymedia on Saturday October 31: "Yesterday in the Royal Courts of Justice, Mr Justice Sweeney ruled against an application which sought to ban all face masks, animal costumes, "blood" splattered coats, and any banners that used the words "murder", "torture", "kills" & "abuses" on an animal rights demonstration. The application was brought by the pharmaceutical giant Novartis in response to a demonstration being held today by Stop Huntingdon Animal Cruelty in Horsham town centre. If the case had gone ahead it would have set a very significant precedent.


"Novartis, represented by Timothy Lawson-Cruttenden, had argued the demonstration incited criminal activity through "subtle" means. He was however unable to explain this took place and his arguments repeated failed to gain ground with the Judge. He also relied heavily on Article 8 of the Human Rights Act, which gives the right to privacy in the home and workplace. Mr Lawson-Cruttenden was arguing that this right should curtail the Article 10 and 11 rights on freedom of assembly and procession.

"The hearing was originally scheduled for October 20th, when it was agreed there would be an injunction under the Protection From Harassment Act put in place. However, Mr Justice Sweeney ordered Novartis to provide supporting evidence for the new changes they wanted made, including getting police statements, with the case to be heard on Wednesday, 28th.

"Though specifically asked by the judge, Mr Lawson-Cruttenden could not provide any case law to support his arguments as significant issues were being raised on how far a publicly advertised demonstration could be controlled by the civil courts, along with other issues. The judge gave his decision on Friday morning, refusing Novartis their application in a long judgement.

"The Defendants, Stop Huntingdon Animal Cruelty, were represented by Dr. Max Gastone, a lay representative, who said, "Novartis were seeking to control the ''atmosphere'' on a protest", which would have been a very draconian ruling if it had been granted. Even the police were wary about how what Novartis sought could have been enforced. However, it was also apparent that the real aims of the court case were two fold. One to get the precedent of these bans in place. The second was that Novartis are very touchy about having their name dragged exposed in public for their involvement in animal testing, and over the deaths associated with some of their products such as Prexige."

"Harriet O'Shea, a protestor at Novartis in Horsham, said, "It is a great relief to hear that this has not been banned. They are trying to make a mockery of legal protest. Why should I not be allowed to wear a beagle costume or a blood splattered lab-coat to make my point visually. Is that not very important in a free society. They may not like it, but the whole point is that Britain is supposed to be a free democracy, though Novartis do not seem to have realised that"."
Posted by The Vast Minority at 02:40