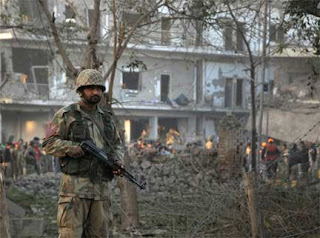 INSURGENTS have struck a deadly blow against Pakistan's notorious secret police, the ISI, with a spectacular suicide car bomb attack on their offices in Peshawar on Friday morning.

Much of the three-story building belonging to Pakistan's national intelligence agency was destroyed, according to reports.

The ISI has been at the forefront of the US-led campaign against the Taliban, who have increasingly operated inside Pakistan during the US occupation of neighbouring Afghanistan.

But there are also well documented links between ISI and Islamist insurgent groups, with the ISI often seen as the go-between linking western intelligence agencies and their enemies in the so-called War on Terror.
Posted by The Vast Minority at 00:09