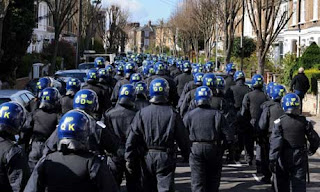 DISPLAYS of force by police in riot gear threaten to undermine the very basis of the 'British model of policing by consent', a major report warned on November 25.

The policing of events like the G20 protests in London in April and the demonstrations at Kingsnorth power station in Kent have exposed poor leadership, widely varying tactics and a widespread misunderstanding of the rights of protesters, it said.

Denis O'Connor, HM Chief Inspector of Constabulary, said: "British police risk losing the battle for the public's consent if they win public order through tactics that appear to be unfair, aggressive or inconsistent," he said.

The Times reported that his findings showed some police forces trained officers in using riot shields to attack people, police abused their powers of stop and search and photographing of demonstrators and they often did not understand the law on the right to protest and the extent of police powers;

In the place of political leadership, the Association of Chief Police Officers (Acpo) had developed more and more policy making and operational roles without having to answer to the public in any forum, said Mr O'Connor.

The report said Acpo's roles in gathering intelligence on "domestic extremism" was not compatible with its current status as a private limited company.

"If Acpo is to be responsible for providing operational support and policy for the police service, it must have transparent governance and accountability structures."
Posted by The Vast Minority at 02:55