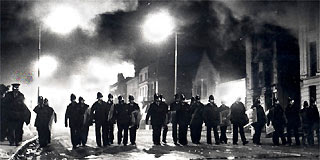 SOCIAL unrest could flare up in Yorkshire, UK, unless the problem of youth unemployment is tackled, the boss of a major quango has warned.

Regional newspaper The Star reported on November 28 that Tom Riordan, the chief executive of business organisation Yorkshire Forward, warned MPs the number of young people out of work is a "huge risk" to the region.

He said "one of the biggest risks" is that youth unemployment could spark social unrest.

Added the report: "His blunt warning will raise the spectre of the riots which broke out in 1981 – a time of recession and rising unemployment – in Liverpool and Brixton.

"There were 49,600 people under 25 claiming jobseeker's allowance according to the latest figures."
Posted by The Vast Minority at 22:38