Resistance steps up in Honduras 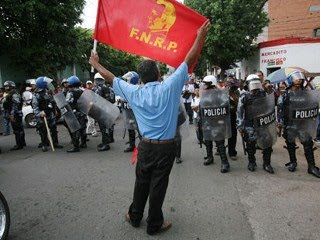 HONDURAN resistance fighters have responded to the trickery of the USA-backed military coup regime by launching an attack on a senior establishment figure.

Associated Press reported that gunmen ambushed a convoy carrying Honduras' top prosecutor Attorney General Luis Alberto Rubi, though neither he nor his bodyguards were harmed.

After the right-wing military coup in June, it was Rubi who filed criminal charges against ousted President Manuel Zelaya.

The USA has widely been suspected of secretly being behind June's coup against a populist leader who had allied himself with Huge Chavez and the Latin American anti-imperialists.

On the surface, though, Washington had given the impression that it was working for the restoration of the democratically elected Zelaya, who has been under siege in the Brazilian embassy since being smuggled back into the country in September.

This culminated in a much-heralded "solution" to the crisis, which Zelaya rejected when it emerged it did not involve him returning to power as president or even any of his suppporters joining the cabinet.

Meanwhile, the chief US negotiator in producing the agreement in the capital Tegucigalpa, Assistant Secretary of State for Western Hemisphere Affairs Thomas Shannon, clarified that Zelaya’s return to office is not a precondition for Washington recognizing an election on November 29 as legitimate. Rather, the mere signing of the accord legitimized the elections.

Reported the World Socialist Web Site on November 9: "This position was confirmed in the action of US Senator Jim DeMint, a South Carolina Republican and member of the Senate Foreign Relations Committee, who dropped his opposition to the Obama administration’s nomination of Arturo Valenzuela to become assistant secretary of state for Western Hemisphere Affairs, replacing Shannon, who is to become US ambassador to Brazil.

"DeMint, a right-wing Republican and fervent backer of the Honduran coup regime, had held up the nominations as an act of protest against what he saw as the Obama administration’s support for Zelaya’s return to power.

"In announcing his shift on the nominations last Thursday, DeMint stated on the floor of the Senate that he was “happy to report the Obama administration has finally reversed its misguided Honduran policy and will fully recognize the November 29 election.

"DeMint continued, 'Secretary Clinton and Assistant Secretary Shannon have assured me that the US will recognize the outcome of the Honduran elections regardless of whether Manuel Zelaya is reinstated. I take our administration at their word that they will now side with the Honduran people and end their focus on the disgraced Zelaya'."

In the face of this betrayal, it is little wonder if the Honduran people are forced into armed resistance to the US-backed military regime.
Posted by The Vast Minority at 22:55