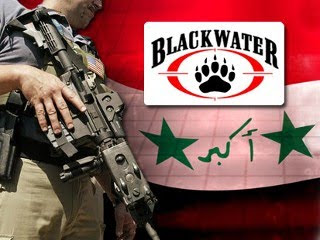 AFGHAN President Hamid Karzai has said US private security firms, including Xe Services LLC, formerly known as Blackwater, are behind terrorism in the country.
Press TV reports that at a press conference in Kabul, Karzai said that US security companies have been behind explosions that have claimed the lives of women and children.

The Afghan president added that they have caused 'blasts and terrorism' in different parts of Afghanistan over the past months.

The Afghan president said his administration cannot even distinguish between the bomb blasts carried out by US security firms and those of the Taliban militants.

"In fact we don't yet know how many of these blasts are by Taliban and how many are carried out by them (US security companies)."

Blackwater has been involved in the murder of several Afghan citizens over the past years. The company has also been struggling with a trail of legal cases and civil lawsuits, including one for killing 17 Iraqi civilians during a Baghdad shootout in 2007.

Earlier in June, the CIA reportedly admitted that Blackwater had been loading bombs on US drones that target suspected militants in neighboring Pakistan.

The Afghan president has also pointed out that American private security firms are corrupt and have fueled nine years of war.

"Deals under the name of private security companies are cut in the hallways of American government buildings. It involves 1.5 billion dollars," he said.

Karzai has accused security companies of running what he called an economic mafia based on crooked contracts.

"The money, 1.5 billion dollars, is being distributed there (in the United States) on Blackwater [sic] and this and that."

The developments come as the notorious Blackwater has been awarded a five-year State Department contract worth up to USD 10 billion for operations in Afghanistan.

In August, Karzai ordered all security firms to disband before the end of the year.

Some diplomats and military officials say Karzai has been under intense pressure to reconsider his decision.

However, Karzai says he is steadfast in his decision to dissolve foreign security firms in the country despite US pressure to reconsider the decision.

The private companies are said to be in charge of providing security for foreign officials and embassies as well as development projects in Afghanistan.

Karzai has blamed mercenaries for civilian deaths and corruption in the troubled region.

Many observers have linked the USA to false flag terror operations in the past, ranging from the notorious Gladio network in Europe to strong connections with al-Qaeda.