Resistance grows against US occupation 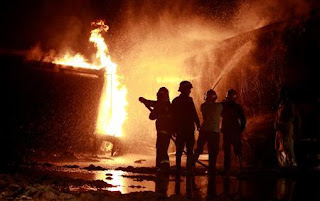 RESISTANCE to the American-led occupation of Afghanistan has stepped up over the last few days.

"Three Nato service members also were killed by bombings in southern Afghanistan and an insurgent attack killed another in the east, raising the coalition's death toll to 11 in the first four days of October."

Meanwhile, as The Independent reports: "The Pakistani Taliban yesterday claimed responsibility for setting fire to more than a dozen oil tankers carrying fuel for Nato troops in Afghanistan.

"The attack on the convoy in the garrison town of Rawalpindi where Pakistan's army is headquartered is the latest in a series by militants and 'would continue until the supplies are completely stopped', said Azam Tariq, a spokesman for the group.

"It was the fourth such attack on a Nato convoy since Pakistan shut down the Khyber Pass crossing in apparent protest over a series of airstrikes by Nato helicopters in Pakistani territory, including one that killed three Pakistani soldiers.

"The shutdown left lorries parked and vulnerable to attack. Before dawn yesterday, a dozen attackers sprayed the vehicles with automatic gunfire. Four people were killed as the trucks were then set ablaze. A further two trucks were in flames hours later."