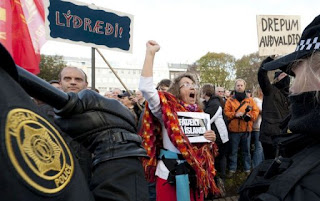 PROTESTERS took to the streets of Reykjavik, forcing MPs to run away from the people they represent as renewed anger about the impact of the financial crisis erupted in Iceland.

Reports The Guardian: "The violent protest came amid growing fury at austerity measures being imposed across Europe.

"Disruption in more than a dozen countries this week included a national strike in Spain and a cement truck driven into the Irish parliament's gates.

"Witnesses said up to 2,000 people caused chaos at the state opening of the Icelandic parliament, with politicians forced to race to the back door of the building because of the large number of protesters at the front.

"Eggs were said to have hit the prime minister, Jóhanna Sigurðardóttir, other MPs and the wife of the Icelandic president, Ólafur Ragnar Grímsson.

"Árni Páll Árnason, the minister of economics affairs, who was caught up in the protests, said: 'We have a difficult economic situation and this is something to be expected in a democratic country'.

"A UN agency has warned of growing social unrest because of a long 'labour market recession' that could last until 2015. The International Labour Organisation revised down its forecast and estimated that 22m new jobs were needed to return to levels before the banking crisis.

"Juan Somavía, director general of the ILO, said social cohesion would be at risk, adding: 'Governments should not have to choose between the demands of financial markets and the needs of their citizens'.

"The protests came in the same week as demonstrations in Greece, Portugal, Slovenia and Lithuania.

"According to the writer Hallgrímur Helgason, anger has flared in Iceland because of the increasing numbers losing their homes and fury that only the former prime minister Geir Haarde has been charged with negligence over the financial crisis. The parliament voted this week to charge Haarde, who has said he is confident he will be vindicated, but not three others facing similar charges.

"Iceland was at the centre of the financial crisis and took out loans from the International Monetary Fund and its Nordic neighbours after the collapse of three main banks in 2008.

"Birgitta Jónsdóttir, one of three MPs to join the protesters, said: 'There is a realisation that the IMF is going to wipe out our middle classes'."