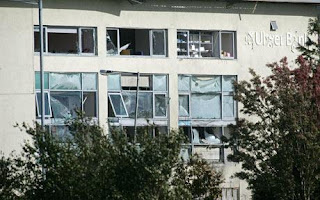 DISSIDENT Republicans in Northern Ireland have bombed a bank, less than a month after they warned they would be doing just that.

The car bomb badly damaged the Ulster Bank in Culmore Road, Derry. Nobody was injured but the attack was widely condemned by the British and Irish establishment.

In September the underground group described bankers as criminals and told The Guardian: "We have a track record of attacking high-profile economic targets and financial institutions such as the City of London.

"The role of bankers and the institutions they serve in financing Britain's colonial and capitalist system has not gone unnoticed.

"Let's not forget that the bankers are the next-door neighbours of the politicians.

"It's essentially a crime spree that benefits a social elite at the expense of many millions of victims."