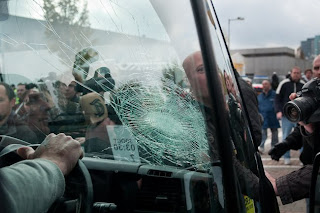 DUTCH antifascists have seen off an attempt by British extreme rightists EDL to export their brand of thuggery across the North Sea.

Intending to lend support to the anti-immigrant politician Geert Wilders, the EDL found themselves outnumbered by opponents, including Ajax football fans, and had their minbus trashed.

Says a statement from Antifa! Amsterdam "The demonstration of the EDL / DDL was an outright failure, not more than 50 protesters eventually took the trouble to show their support for Wilders.

"This while the organization, even after the forced relocation to a midle of nowhere spot in the western docklands, still said this week to expect up to 1,000 supporters.

"In the end, the meager turnout (in particular on the part of the Dutch Defence League, only a few of the protesters were Dutch) and the fierce resistance that they were confronted with should be an omen about the future prospects of their crossing of the channel.

"This while simultaneously a broad range of hundreds of people and dozens of groups showed throughout the city their disapproval and anger about the coming of the racist scum to the capital.

"Antifa! Amsterdam expresses support and appreciation to each and everyone who has gone out on the streets today against racism and xenophobia.

"From the hundreds of protesters who protested at 1941 general strike monument, the dozens of activists that spread over the city to prevent that the EDL would still showup in the center, to the many people who decided to ignore the emergency orders from the mayor and went in direct action in the docklands.

"The great variety of people who have come today in opposition is a clear signal, from young immigrants to experienced activists, from soccer fans to social organizations.

"In particular, the presence of Jewish individuals and the reform movement in Iran, for whom the EDL pretends to speak, and the high turnout of football fans that the EDL consider as their natural support, show that people are not deceived by the EDL. "

In summary Antifa! Amsterdam considers the day as overwhelmingly successful, and calls on everyone to keep fighting, in resistance against discrimination, hatred, fear and extreme right violence."
Posted by The Vast Minority at 04:03