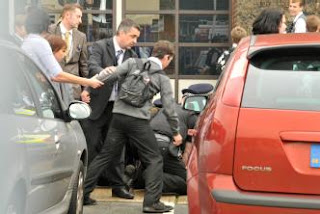 POLICE were called to a school in Kent, UK, after hundreds of children walked out of lessons in protest over changes to the timetable.

Reports the BBC: "Between 200 and 300 children are understood to have taken part in the protest at Dover Christ Church Academy.

"Pupils said the protest was mainly about changes to the lunch hour, which meant they were split into two groups."

The school gate and three or four cars belonging to staff were all damaged.