Riots break out across France 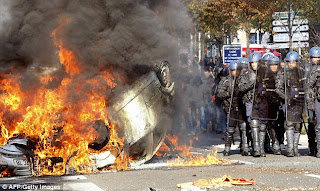 RIOTS are breaking out across France, as the population shows its anger at the neoliberal 'austerity' measures being imposed on them by the hated Sarkozy regime.

Secondary school children have been blockading schools and youngsters have been fighting back against the police.

In several cities cars have been torched and molotov cocktails thrown at riot cops.

A college near Le Mans was set on fire and burnt to the ground.

The authorities say that 290 'casseurs' (hooligans) were arrested on Monday alone.

University students, who have not so far been involved, are now about to also join in the battle, raising the stakes still higher.

Because of union blockades of oil refineries, petrol is running out across the country, with two-hour queues forming even where fuels is available.

Poll show a massive 70% of the public support the strike, but President Sarkozy refuses to back down from his authoritarian capitalist position.

Comments the Daily Mail: "Many fear a re-run of the May 1968 riots in Paris when thousands took to the streets to try to bring down the government of President Charles de Gaulle."

Tuesday sees another day of mass action and strikes - and the momentum currently seems to lie firmly with the street.
Posted by The Vast Minority at 23:13