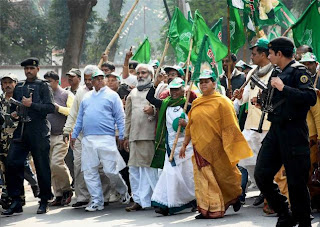 FOOD riots broke out in one of India's poorest states yesterday, as prices soar and revolt deepens.

"At least 12 passengers were injured when angry crowds stoned a train in Hajipur town, while thousands marched in the street in different parts of the state asking shops to close."

Added The Times of India: "According to reports, police fired in the air to disperse a crowd that had blocked a road at Dhangarha in East Champaran district. Bandh supporters also stoned vehicles at some places, police said. "

Food prices have soared because last year's monsoon rains, which irrigate 60pc of Indian farms, were the worst in 37 years. Higher prices paid by government agencies to buy grains from farmers also helped push the inflation rate to 7.31pc in December, the highest in a year.