Revolt in Rosarno - immigrants rise up 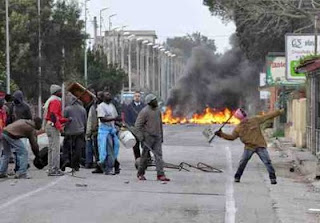 AFRICAN immigrants have risen up in southern Italy in two days of full-out rioting.
The rebellion was sparked by a racist attack but reflects the horrific conditions and poverty in which these modern-day slaves are forced to subsist.
The Press Association reported at least 37 wounded, including 18 police officers in the Rosarno revolt.
Added The Independent: "In one of the worst-ever incidents of racial unrest in Italy, the violence broke out on Thursday evening after white youths in a car fired air rifles at a group of immigrants returning from working on farms.
"Two immigrants were slightly injured by the gunfire. 'Those guys were firing at us as if it was a fairground,' a Moroccan identified as Kamal told La Repubblica newspaper. 'They were laughing, I was screaming, other cars were passing by but nobody stopped.'
"In a furious reaction, immigrant farm labourers fought pitched battles with police that lasted into the early hours. Dozens of cars were smashed with bricks and bars and the driver and passengers in one vehicle injured.
"Yesterday, more than 2,000 Africans massed in the town centre to demonstrate against the shootings and their living and working conditions. Some chanted 'we are not animals' and others carried placards saying: 'Italians here are racist'.
"This resulted in further clashes with police officers and locals, some of whom fired weapons into the air as the tension continued to escalate. Sporadic acts of vandalism continued and schools remained closed."
Posted by The Vast Minority at 02:39