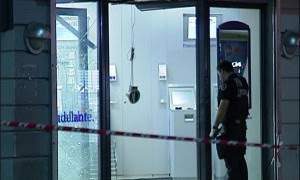 ANARCHIST insurgents have launched bomb attacks on banks in both Argentina and Mexico.
A statment from the Revolutionary Cells (Salvador Puig Antich Brigade) on Ai Ferri Corti said: "In solidarity with the international hunger strike being carried out by anarchist comrades, we used a medium-powered homemade device to attack a Banco Francés branch on the corner of Calle Corrientes and Calle Uruguay in downtown Buenos Aires.
"In this way we show the vulnerability of spaces controlled by capital, and the uselessness of its faithful servants.
"We salute all those who struggle every day against this system of misery and hunger, and we call on them to not lower their guard and to continue the campaign of offensives against the state and capital."
And a communiqué from the Animal Liberation Front/Earth Liberation Front in Mexico said: "At around 3 a.m. on December 24, we left an explosive device stuffed with dynamite at the BBVA bank branch in Ecatepec, Mexico State. At the same time, we left another one of our gifts in front of of the Kenworth company, which was being guarded by two state police patrols. Both targets suffered damage to their windows.
"We undertook this action on the same avenue (José López Portillo) where, a few weeks ago, the 'Unforgettable Vengeance Eco-Sabotage Brigade' detonated a gas canister bomb at a Banamex in Coacalco.
"The authorities didn’t imagine that other groups would again attack the same 'controlled perimeter,' and they left such targets vulnerable and ready for our packages of dynamite.
"The destruction of their social peace was inevitable when the fuse was lit and the device activated. The loud explosions echoed in the ears of those who sustain power and authoritarianism, gained at the cost of the destruction of the planet we live on, which in turn is mostly caused by companies like the ones we attacked this morning.
"BBVA is a deceitful company that manages money earned from the exploitation of animals, humans, and the Earth. Kenworth is tied to the construction industry and has contacts with businesses like CAT and CARSO, which are directly responsible for environmental devastation."
Posted by The Vast Minority at 05:15