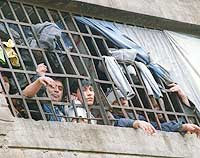 RIOTING prisoners took over a jail in Peru, forcing the authorities to negotiate with them to release hostages.
Said the New York Times: "Peruvian officials say a riot by about 500 inmates at a northern prison killed two inmates and six guards were held hostage until negotiations got the prisoners to end their protest.
"Chief Cabinet minister Javier Velasquez says the violence erupted on New Year's Eve in the prison in Chachapoyas, about 650 kilometers (400 miles) northeast of Lima.
"Velasquez says he's not sure what caused the riot, but local Television N says inmates want a change in prison management because of a crackdown on drugs and cell phones.
"The rioters met with high-level officials Friday, then freed the five male and one female guards taken hostage."
Authorities are not revealing what concessions were made to the rebel inmates.
Posted by The Vast Minority at 05:26