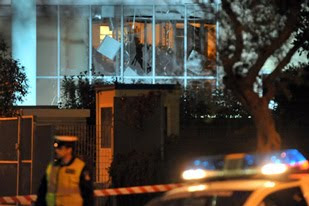 GREEK insurgents have exploded a bomb outside Greece's press ministry building, causing property damage but no injuries.
Reported Al Jazeera: "The bomb went off outside the government building in the capital Athens late on Friday, just after private television stations Alter and Antenna had received anonymous warnings that an explosion was imminent."
It said police reported there had been an anonymous warning call to two TV stations and a newspaper 15 minutes before the device went off.
Added the website: "The explosion, which shattered windows, is the second one in Greece in less than a week.
"Leftist and anarchist groups have mounted a series of attacks against police, business and public institutions since the police killing of a teenager triggered Greece's worst riots in decades in December of 2008.
"Conspiracy of Fire Nuclei, a far-left group, claimed responsibility for a similar incident targeting the parliament on January 10, which also only caused minor damage.
"The group also claimed a bombing that caused extensive damage to the ground floor of Greece's largest insurance company, Ethniki Asfalistiki, on December 27. 'We aim to cause material damage and we point out to the police that is should evacuate areas in a timely fashion,' a text claiming the insurance building attack on behalf of the outfit said at the time.
"Another group, Revolutionary Struggle (EA), has been active for the last six years and is blacklisted by the European Union as a terrorist organisation.
"EA claimed an attack on the Athens stock exchange in September, which caused no injuries. In 2007 the group fired a rocket at the US embassy without hurting anyone."
Posted by The Vast Minority at 09:54