US military flies over Venezuela 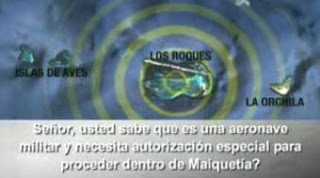 FEARS of an American attack on Venezuela have been raised by an incursion into its airspace by a US military jet.
The Spanish paper El Pais reports today that Venezuelan TV has broadcast a conversation, in English, between the pilot and the control tower at Maiquetía international airport.
The pilot says he has flown from Curazao which, like Aruba, is a Dutch-owned island off the coast of Venezuela.
Venezuela's anti-US leader Hugo Chavez has warned that the US would use Colombia, Aruba and Curazao as "platforms" from which to attack his country.
Posted by The Vast Minority at 05:46