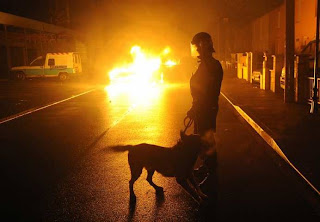 A FRENCH town erupted into riots after the death of a youngster whose scooter had allegedly been forced off the road by police.
Residents of Woippy, a suburb of Metz in the east of the country, were not swallowing the official line that the 'accident' was in no way the fault of the cops and after a 200-strong silent protest, it all kicked off.
Said one report: "Youths set cars, trucks and a bus on fire, Deputy Mayor Jean-Marc Rosier told Reuters. They also smashed phone booths, while riot police responded by firing stun grenades, footage from M6 television network showed."
Posted by The Vast Minority at 10:28