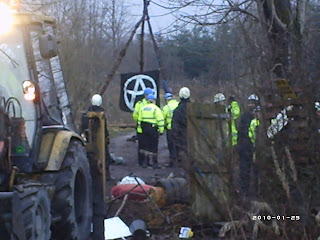 RADICAL environmentalists in Scotland put up a heroic five days of intense resistance to the eviction of the Mainshill Solidarity Camp, protecting woodlands from coal mining.
Reported Indymedia Scotland: "A total of 45 people have been arrested, making Mainshill the biggest protest site eviction in 11 years. The eviction is not an end, but merely a beginning - the struggle continues!
"All five days saw the violence inflicted by the state on those who try to create positive change, and the collusion between the courts, police and corporations.
"But they also saw heroic acts of defiance, with people fighting off bailiffs until having their hands and feet cable-tied together and supporters maintaining a 24-hour vigil throughout the eviction.
"This eviction is not an end, but the beginning of a campaign of community-based radical direct action sweeping Scotland’s central belt which can only grow in strength.
"From actions to stop work on opencast sites and the shutting down of a major coal rail terminal for a day (which happened for a third time on Wednesday), to community engagement and solidarity resulting in a seven-month occupation and a positive change in direction for radical environmentalism in Scotland.
"But where can we go next? We’ve hit these capitalists and money-grabbers where it hurts most – in the pocket – and we can’t wait to hear how much it has cost them in total.
"Over 30 direct actions have taken place over the past 12 months, and that’s not including the eviction. Machines have been trashed, health studies published and bonds been made with those affected by heavy industry and the causes of climate change. We’ve dug tunnels, defended trees and climbed onto diggers.
"The Mainshill Solidarity Camp has now been evicted, but the struggle continues!"
Posted by The Vast Minority at 01:58