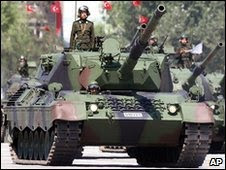 A SINISTER military conspiracy, probably covertly backed by the USA, is being confronted by the Turkish government.
Reports the BBC: "Seven senior military officers have been formally charged in Turkey with attempting to overthrow the government.
"They include four admirals, a general and two colonels, some of them retired.
"The seven were among more than 40 officers arrested on Monday over an alleged 2003 plot to stir up chaos in Turkey and justify a military coup. "
Says Al Jazeera: "The arrests are believed to be linked to a purported 2003 plot to discredit the AKP government, a plan revealed by the Taraf newspaper in January.
"The plan, codenamed Sledgehammer, involved bombing two Istanbul mosques and escalating tensions with Greece by forcing Greek jets to down a Turkish plane over the Aegean Sea.
"The act would have been an attempt to show the Turkish government as inept, according to documents obtained by Taraf."
Adds the BBC: "The alleged plot is similar, and possibly linked, to the reported Ergenekon conspiracy, in which military figures and staunch secularists allegedly planned to foment unrest, leading to a coup.
"Scores of people, including military officers, journalists and academics, are on trial in connection with that case."
However, the BBC does not report on links with the Europe-wide Gladio conspiracy, in which a secret network of 'stay-behind' guerrillas/terrorists was set up by the USA and UK to ensure control of governments remained in 'friendly' hands.
Explains Wikipedia: "As one of the nations that prompted the Truman Doctrine, Turkey is one of the first countries to participate in Operation Gladio and, some say, the only country where it has not been purged.
"According to Italian magistrate Felice Casson, the Turkish stay-behind forces are two-pronged: the military "Counter-Guerrilla", and the civilian "Ergenekon". An offshoot of the latter organization is currently the subject of a major investigation. Casson says Turkey is home to the most powerful branch of Operation Gladio."
Posted by The Vast Minority at 03:53