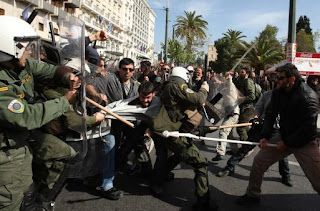 RESISTANCE and revolution are once more in the air in Greece as the global finance system tries to grind its people down to pay for the speculators' greed.

Reports today's SchNEWS direct action news bulletin: "Greece has once again been rocked by protests, strikes and civil unrest. This time in response to a series of swingeing government cutbacks aimed at bringing the country into line with neo-liberal dogma and reducing its budget deficit.

"In response to proposed attacks on workers’ rights and pensions, virtually the entire country came out on strike on Wednesday. 30,000 marched through Athens and violently clashed with police. There is widespread anger at the governments attempts to deal with the economic crisis by dipping into the pockets of the poor. Marchers in Athens shouted, “No sacrifices! Make the rich pay for the crisis!”

"The measures proposed include a rise in the retirement age, slashing of state bonuses and controls to diminish tax evasion together with higher taxes on fuel, tobacco and alcohol. However, any austerity measures will have to be forced through in a country with a population already verging on open revolt. A shock doctrine approach isn’t going to catch the Greeks by surprise."

The massive opposition is not stopping the global bloodsuckers from maintaining and even upping their demands, however.

Reports today's Wall Street Journal: "The European Union is pushing Greece to urgently adopt new austerity measures amounting to an extra €4 billion ($5.42 billion) if it is to achieve its goal of slashing its staggering budget deficit by four percentage points this year, a senior government official said Friday.

"'They [the EU] are telling us the current measures will only cut two percentage points. They are pushing very hard for another package of around €4 billion,' the official, who asked not to be identified. 'Greece thinks a package of €2 billion to €2.5 billion will be enough to achieve the targets,' he said.

"Officials from the EU, the International Monetary Fund and the European Central Bank had been in Athens since the start of the week to evaluate Greece's progress in cutting its budget deficit—an issue that has hit the euro and financial markets across the world because of fears that Greece could become the first euro-zone country to default on its debt payments. "