Anti-Olympic resistance kicks off in Canada 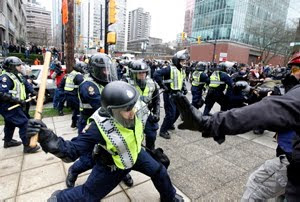 ANARCHISTS clashed with police in Vancouver, Canada, over the weekend in a high-profile protest at the corporate junket known as the Winter Olympics.
Reported the LA Times: "Anti-Olympic protests erupted into clashes with police Saturday as a roaming band of masked activists broke plate-glass shop windows at the iconic Hudson's Bay Co., smashed car windows and hurled trash cans and news racks into busy intersections.
"Riot police moved in several times to secure key downtown thoroughfares and occasionally wrestled protesters to the ground with batons, though there were no serious injuries.
"Police were finally able to corner the band of about 300 protesters on a commercial block in Vancouver's west end and then formed a cordon around the leaders, sealing them off as the crowd screamed 'Let them go!'
"They were released a short while later on the condition that they disperse. Police said about 100 masked 'criminal' anarchists were marching among about 200 protesters who appeared to be law-abiding."
In response to this blatant police attempt to criminalise dissent, an anti-Olympics campaigner told the paper: "The Vancouver Organizing Committee are the criminal element that have pilfered the public coffer of as much money as they could, and we're going to see the effects of it after these Games with cuts to education, cuts to housing, cuts to all the public services."
Alissa Westergard-Thorpe of the Olympic Resistance Network was quoted by the Canadian Press accusing the police of trying to intimidate Olympic critics and pointing out that the protesters hadn't been 'violent' at all, as had been widely claimed.
"Protesters have never been violent toward human beings," she said. "Property damage is not the same as violence, and it certainly is nothing compared to the tools that police have, manhandling them, pushing them, hitting them with bicycles."
Posted by The Vast Minority at 10:21