Something powerful is in the air 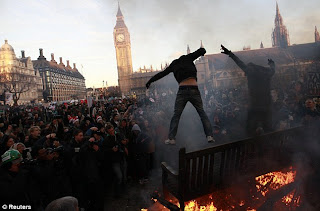 EVERYTHING has changed on the streets of Britain over the last few weeks.

Partly it is just a matter of mood – an electrically charged atmosphere at the anti-cuts protests that presents the visceral possibility that anything at all could happen next.

But it is also possible to identify some specific factors that have dramatically and rapidly transformed the landscape of domestic protest.

The new generation of rebels have made remarkable progress in several areas:

• Tactical. They are wised up to police methods, often successfully avoiding containment. They spotted that the ‘agreed route’ to Thursday’s march was nothing but a rolling kettle designed to end in a giant trap out of sight of Parliament on Victoria Embankment, under the guise of a rally addressed by various dull centre-leftists. As well as appreciating the need to keep mobile, they also mostly now know to mask up when appropriate.

• Physical. They have the courage to take on and break through police lines and the speed and stamina to stage running demonstrations through the city streets, leaving the Plod to live up to their nickname.

• Political. There is plenty of joined-up thinking in evidence. Protesters in Oxford Street quickly identified Boots, BHS, Dorothy Perkins, Vodafone etc and targeted them as corporate tax dodgers, making the vital link between spending cuts and capitalist corruption. The police have been fully exposed as a private army of capitalism and most of the mainstream media as nothing but propaganda conduits for the same system.

• Class consciousness. Perhaps the most significant development of all, as veteran anarchist Ian Bone points out in his blog. The highly publicised attack on Charles and Camilla’s Rolls Royce was not out of place on a day when chants of “The rich, the rich, we’ve gotta get rid of the rich” filled the West End. Cameron was mocked for his Eton past. Posh cars and pedestrians were picked out for abuse, with one youngster shouting angrily at an arrogant driver who tried to run him over: “Why do you need a fucking Range Rover anyway?” These protesters understand the Tory vision of Britain and their own proposed place in it – as an underclass of serfs serving the smug public school Ubermensch. And they are simply not going to accept that version of the future. They have little prospect of higher education, of a worthwhile job, of a home of their own… They have nothing to lose and everything to fight for.

Commentators have made the connection between these protests and the anti-capitalist demonstrations of 1999-2003. Parallels have also, of course, been made with the Poll Tax riots of 1990. Others have mentioned 1968 and Ian Bone invokes the London Mob and the Gordon Riots.

But one link that hasn’t been widely made is with the inner city riots that swept the UK in 1981.

This cold winter of discontent is by no means over yet, but already rebel hearts are being warmed by the prospect of a heated Spring and Summer of 2011.
Posted by The Vast Minority at 11:19