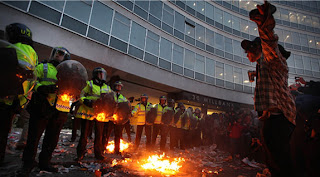 FAILING the timely intervention of a 9/12 terror attack in London, two news stories are likely to dominate the UK media on Thursday.

One is the continuing leaking of US embassy cables by Wikileaks, together with the US-led persecution of both website and founder, and the other is the students’ March on Parliament as the tuition fees vote takes place.

Except, of course, they are not really two separate stories at all, but merely two facets of one narrative.

In both instances, the mask of ‘democracy and freedom’ - behind which our rulers have so long been hiding – has not much slipped as fallen to the hard winter ground and shattered into a thousand splinters.

The original spark for confrontation in both disputes was an outrageous deception.

In the case of the USA’s foreign policy, this has been perpetrated for decades and visible to many global observers for much of the time.

But now there is no more benefit of doubt to be enjoyed – we all know for sure that they are just as hypocritical and manipulative as we had ever imagined.

In the tuition fees debacle, young people have been shocked to discover that a ‘pledge’ from a politician is an empty gimmick. Like the US government, Clegg has always been prepared to lie through his teeth in the pursuit of power.

The students and school kids who have been taking to the streets for the last month have demonstrated, and discovered, the all-too-narrow limits of dissent permitted by the British state.

And Julian Assange of Wikileaks has exposed the truth behind the neoliberal attachment to free speech and a pluralistic internet.

Step over a certain line and the illusion of cosy liberalism is abandoned, as powerful players are forced to step forward to defend the status quo.

The student rebels have found that the state will send its hired thugs out on to the streets to crush the slightest sign of empowered opposition.

Wikileaks have found themselves confronted with the full spectrum of commercial persecution available to the US regime.

All of this raises these originally specific conflicts up to a whole new level of contestation.

Young kids now realise that the police and the media are every bit as much their sworn enemy as Cameron, Clegg and the other Tory cunts.

Wikileaks has forced the likes of Amazon, PayPal, Visa and Mastercard to reveal themselves as the partisans of the global capitalist dictatorship that some of us have always known they were.

Other issues, in the months to come, will follow the same pattern and emerge likewise as aspects of the same worldwide scenario.

And once you have seen through the illusions of neoliberal ‘democracy’, there is no going back.

The battle lines are clearer now, to far more people, than they ever have been before.

Our war for liberation has begun.
Posted by The Vast Minority at 12:03