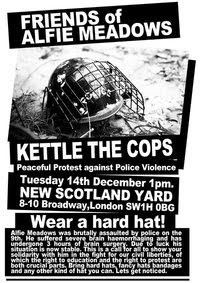 ANGRY students have called for a protest against police brutality outside New Scotland Yard in central London on Tuesday December 14.

A posting on Indymedia from Friends of Alfie Meadows calls on supporters to "Kettle the Cops - protest against police violence" and to wear a hard hat.

It adds: "Alfie Meadows was brutally assaulted by police on the 9th. He suffered severe brain haemorrhaging and has undergone 3 hours of brain surgery.

"THE POLICE TRIED TO STOP THE HOSPITAL TREATING HIM-HE COULD HAVE DIED IF NOT FOR THE AMBULENCE DRIVER! Something the mainstrean bullshit media is hiding.

"Due to luck his situation is now stable. This is a call for all to show your solidarity with him and the fight for our civil liberties, of which the right to education and the right to protest are both crucial parts.

"Bring hard hats, fancy hats and any other kind of hat you can. Lets get noticed.

"Please pass this on to all sympathizers and post up the flyer anywhere you can. We need 1000's on this demo-we will not tolerate extreme violence by these thugs.

"To the streets! Spread the word."

There is a Facebook page for the protest.
Posted by The Vast Minority at 08:55