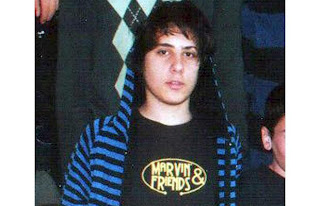 MASSIVE protests are to be held all across Greece on Monday to mark the second anniversary of the assassination of 15-year old Alexis Grigoropoulos by special police forces in the Exarcheia district of Athens.

The From the Greek Streets blog will be carrying continuous updates from demonstrations and actions organised in Athens and Thessaloniki and a summary of the events nationwide. There are demonstrations called in at least 17 Greek cities.

Says the blog: "On Sunday night, police presence in Exarcheia was very high (even higher than usual) and at least four people were reported to have been detained by police."

Among the protests called are:

On the eve of December 6th, the police announced an unprecedented 21-hour traffic ban in central Athens: no vehicles whatsoever are permitted to park or drive through pretty much the entire city centre.
Posted by The Vast Minority at 23:02