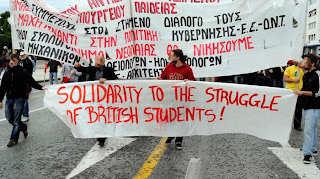 TWO thousand students marched in Athens against education reform and in solidarity with the British students.

There were clashes with police and five students arrested.

From The Greek Streets reports: "The demonstrators tried to approach the British Embassy in solidarity with the struggle of the students in the UK.

"In response to the arrests, the entire demonstration headed to the police headquarters (GADA) demanding their immediate release."

The blog includes a short video and will be updated with more information.

The action, together with the Italian student protests this week, reinforces the fact that education 'reforms' and cuts are not isolated national issues with specific local causes, as the corporate media claims.

The whole of European society is coming under unprecedented attack from neoliberal forces and students everywhere are finding themselves on the front line.