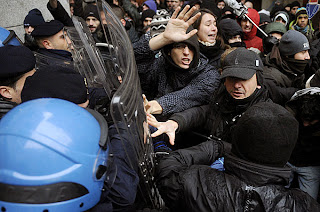 THOUSANDS of students in cities across Italy have protested against a law that would result in cuts to university budget expected to be approved by parliament this week, reports Aljazeera.

It says: "Police blocked off large parts of central Rome, the capital, to prevent a repeat of last week's violent clashes, but students managed to avoid the blockade.

"Instead the demonstrators occupied part of a highway running to the east of the city, but many students made it clear they intended the action to be a peaceful one.

"Some carried flags and banners emblazoned with non-violent slogans, and many had painted their hands white as a representation of their peaceful intent.

"However clashes broke out at a protest in the city of Palermo, and there were reports of incidents in Naples, Milan and Turin.

"The government says the new law, which could be voted on Wednesday or Thursday, will strengthen Italy's crumbling university system. But critics say will only cut funding without solving real problems.

"The battle over university reform has highlighted discontent over the future of Italy's youth, which has been fuelled by an official youth unemployment rate of around 25 per cent in the country and up to 35 per cent in the poorer south."

Reuters quotes one student as saying:"We will certainly continue mobilising. It's not only a mobilisation against university reforms but of a generation that is making itself heard again over the politics of the country, the issues we face and the precarious situation in which we live."
Posted by The Vast Minority at 23:45