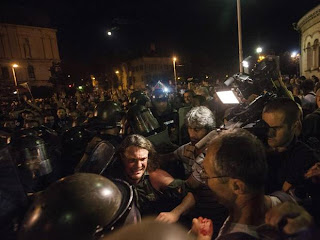 Insurrection against the corrupt global neoliberal system is spreading across the Balkans.

In Sofia, Bulgaria, protesters sick of the regime have laid siege to parliament and managed to trap 100 MPs and ministers inside for more than eight hours.

As ever, the authorities turned to violence to restore their control, and sent in cops to attack the public and rescue the hated politicians.

Bosnians have also been taking to the streets in recent months amidst growing discontent.

Greece has been battling neoliberal tyranny for years now and the Turkish people have this year woken up to the reality of the global despotism which enslaves humanity in the interests of profit for the few.

The reaction of the system is only ever to notch up levels of repression. In the UK, for instance, a new law is being planned to give police the power to clear areas of people they “reasonably suspect” are engaged in conduct that contributes to “ members of the public in the locality being harassed, alarmed or distressed”.

Explains SchNEWS: "A dispersal order can be issued by any officer of the rank of Inspector or above and lasts for a period of 48 hours. It allows the police to specify how and when people must disperse.

"To not disperse will of course be an arrestable offence with a potential three months' imprisonment attached. The new laws will also give the cops the power to seize items used in the conduct of 'anti-social behaviour' as well as taking those aged under 16 to 'a place of safety'."

Neoliberal capitalists anywhere in the world will not surrender their power and wealth voluntarily - we are all going to have to "disperse" it for them.