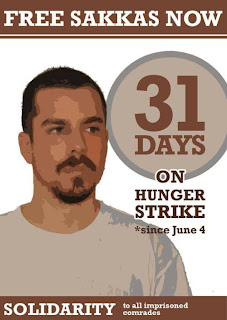 A global solidarity campaign is underway to support Greek anarchist prisoner Kostas Sakkas who has been on hunger strike since June 4.

Kostas was arrested in December 2010, one of the earliest in a wave of arrests targeting the “Conspiracy of Cells of Fire”.

Both Kostas and the CCF deny he was ever a member, and Kostas has separately taken responsibility for his political activity as an anarchist.

Held ever since, his initial pre-trial detention maximum expired eighteen months later, in the summer of 2012 - yet it was extended by another year, to June 2013.

At that time, a court of appeals in Athens ordered the extension of Kostas’ detention by another six months, now solidly stepping outside the boundaries that the legal apparatus had set for its own self.

On June 4, Kostas went on a hunger strike in protest and this has prompted a wave of support.

More than 6,000 people joined  a solidarity demonstration on June 29 which began in Monastiraki and crossed through most of central Athens.

A moto-solidarity action is being staged in Athens on Friday July 5. For updates see From the Greek Streets.