Cairo: "We want the downfall of the System!" 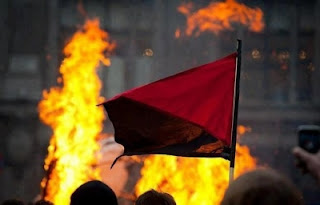 “We want the downfall of the System!”

That was the message from radicals on the streets of Cairo this week as the Morsi regime tottered towards today's collapse.

From Istanbul to Rio de Janeiro, from Santiago to Manama, the battle against neoliberalism is one and the same.

Nobody expects it to be easily won – there will always be yet another phoney saviour lined up in the political wings to ensure it’s “business as usual” in the corridors of power.

But the numbers and the anger on the streets all over the world in the last few weeks will have had the elite shaking in their boots in fear of what is to come. People power on this scale is something they can neither control nor ignore, as Morsi found out to his cost.

In an online statement this week, some “Comrades from Cairo” outlined how the neoliberal agenda is the common factor among the regimes currently facing popular uprisings.

They explained: “In Egypt, the Brotherhood only adds a religious veneer to the process, while the logic of a localized neo-liberalism crushes the people.

“In Turkey a strategy of aggressive private-sector growth, likewise translates into authoritarian rule, the same logic of police brutality as the primary weapon to oppress opposition and any attempts to envision alternatives.

“In Brazil a government rooted in a revolutionary legitimacy has proven that its past is only a mask it wears while it partners with the same capitalist order in exploiting people and nature alike.

“These recent struggles share in the fight of much older constant battles of the Kurds and the indigenous peoples of Latin America. For decades, the Turkish and Brazilian governments have tried but failed to wipe out these movements’ struggle for life.

“Their resistance to state repression was the precursor to the new wave of protests that have spread across Turkey and Brazil. We see an urgency in recognizing the depth in each other’s struggles and seek out forms of rebellion to spread into new spaces, neighborhoods and communities.

“Our struggles share a potential to oppose the global regime of nation states. In crisis as in prosperity, the state — in Egypt under the rule of Mubarak, the Military Junta or the Muslim Brotherhood — continues to dispossess and disenfranchise in order to preserve and expand the wealth and privilege of those in power.

“None of us are fighting in isolation. We face common enemies from Bahrain, Brazil and Bosnia, Chile, Palestine, Syria, Turkey, Kurdistan, Tunisia, Sudan, the Western Sahara and Egypt. And the list goes on.

“Everywhere they call us thugs, vandals, looters and terrorists. We are fighting more than economic exploitation, naked police violence or an illegitimate legal system. It is not rights or reformed citizenship that we fight for.

“We oppose the nation-state as a centralized tool of repression, that enables a local elite to suck the life out of us and global powers to retain their dominion over our everyday lives.

“The two work in unison with bullets and broadcasts and everything in between. We are not advocating to unify or equate our various battles, but it is the same structure of authority and power that we have to fight, dismantle, and bring down. Together, our struggle is stronger.

“We want the downfall of the System.”
Posted by The Vast Minority at 12:16