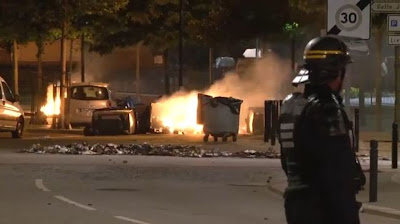 TWO nights of rioting have rocked a suburb of Paris, after youths decided they had had enough of police oppression.

Cars and bins were torched and fireworks launched at police, who attacked locals with tear gas and "flashball" rubber bullets, leaving a 14 year old boy blinded in one eye.

In a dramatic incident at 1.30 on Sunday morning, a grey Renault Clio car drove up to the Trappes police station, heavily protected by police cars.

Instead of stopping, it smashed into barriers, prompting a helicopter chase which ended with a battle between 50 rioters and 150 CRS riot police.

The fighting in Trappes was sparked by a police search of a woman wearing a traditional Muslim veil, but one man told one TV report they were generally fed up with "being treated like dogs" by the cops.

On Saturday night, the action spread to nearby Elancourt and Guyancourt.