Stay out of Libya, USA is warned 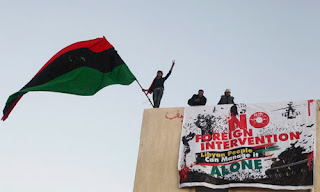 LIBYAN revolutionary Muhammad min Libya has written on the Guardian website that Libya is united in popular revolution and the USA and its allies should not interfere.

He says: “We welcome a no-fly zone, but the blood of Libya’s dead will be wasted if the west curses our uprising with failed intervention”

Despite all the violence and bloodshed, Libyans have high hopes. Gaddafi and Saif’s threats, he says, backfired as everyone across Libya went out to assert national unity. All Libyans feel it is only a matter of time before Gaddafi regime is gone.

“This happy ending, however, is marred by a fear shared by all Libyans; that of a possible western military intervention to end the crisis,” he says.

“So as the calls for foreign intervention grow, I’d like to send a message to western leaders: Obama, Cameron, Sarkozy.

"This is a priceless opportunity that has fallen into your laps, it’s a chance for you to improve your image in the eyes of Arabs and Muslims. Don’t mess it up.

"All your previous programmes to bring the east and the west closer have failed, and some of them have made things even worse. Don’t start something you cannot finish, don’t turn a people’s pure revolution into some curse that will befall everyone.”
Posted by The Vast Minority at 23:23