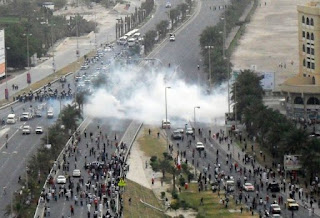 Reports AFP: "They said tear gas and rubber bullets were used against about 350 activists who had sealed off the capital's Financial Harbour business complex with road blocks and a human chain.

"Hospital sources said around 200 people were hurt in the violence, mainly from inhaling tear gas. Three of those being treated were in critical condition, including one with severe head injuries."

A video uploaded on Sunday to YouTube shows Bahraini riot police shooting an unarmed protester in the head at point-blank range with a tear gas round.

The man is remonstrating with helmeted riot police when they shoot him twice from just metres (yards) away -- once in the body and, when he tries to get up, a second time in the face.

The user who posted the 33-second "face-to-face shooting" clip says it was filmed during Sunday's unrest in Manama.

It can be seen on http://www.youtube.com/watch?v=D9W_-0uGN1E&feature=youtu.be&skipcontrinter=1.
Posted by The Vast Minority at 00:31