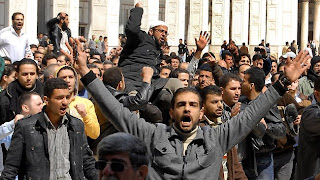 AS PEOPLE power in Syria threatens to topple autocratic leader President Assad, Israel is hoping that he stays in power.

That's the anaylsis in an article by Edmund Sanders in the Los Angeles Times.

He writes: "Syrian President Bashar Assad's race to tamp down public unrest is stirring anxiety in Israel that is even higher than its hand-wringing over Egypt's recent regime change.

"Unlike Israel and Egypt, Israel and Syria have no peace agreement, and Syria, with a large arsenal of sophisticated weapons, is one of Israel's strongest enemies.

"Though Israel has frequently criticized Assad for cozying up to Iran, arming Lebanon's Hezbollah movement and sheltering leaders of the Palestinian militant group Hamas, many in Israel think their country might be better off if Assad keeps the reins of power.

"Several Israeli government and military officials declined to speak in depth about Assad, fearing any comments could backfire given the strong anti-Israel sentiments in the Arab world.

"That's what happened when some Israeli officials attempted to bolster Egyptian President Hosni Mubarak before he resigned Feb. 11."

Meanwhile, Assad has been claiming that conspiracies involving Israel and the USA are behind the insurrection.

Protests countinue to mount and further bloodshed is predicted over the coming days as the President clings to power.
Posted by The Vast Minority at 23:33