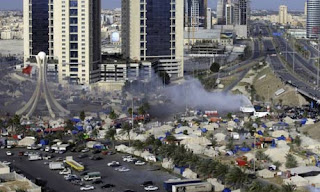 NEOLIBERAL global forces are using the ongoing disaster in Japan as a cover for a brutal attack on protesters in Bahrain.

Al Jazeera is reporting horrific scenes as anti-regime demonstrators at Pearl Roundabout in Manama are attacked by US-made Apache helicopters and foreign troops.

Ambulances are being denied access to the wounded in what appears to be an all-out military assault on the unarmed rebels.

Adds The Guardian: "Gunfire was widely heard throughout the capital and at least five helicopters were circling scenes of clashes, amid widespread panic on the streets below.

"This morning's events are a significant escalation in more than eight weeks of clashes that have threatened the legitimacy of Bahrain's monarchy and stoked sectarian tensions throughout the Gulf and Saudi Arabia.

"They follow the arrival of more than 1,000 troops from the Gulf Cooperation Council (GCC), invited to the kingdom by its beseiged rulers.

"One Amoured Personnel Carrier flying a flag of the United Arab Emirates was seen by bystanders this morning amid a column of troop carriers."

The chances of any "humanitarian intervention" from the western allies of the oil-rich Gulf dictatorships are not thought to be high.
Posted by The Vast Minority at 00:14