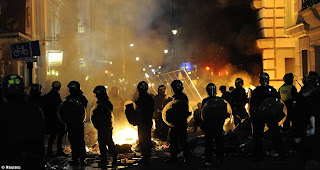 CLASS War broke out on the streets of London on Saturday, as anarchists attacked banks, shops and other symbols of the parasitical neoliberal elite.

A huge Black Bloc, at least 500 strong, roamed freely through the West End of the British capital, picking off targets at will with bricks, paintbombs and fireworks.

Sporadic police attempts to stop the Bloc were met with robust resistance and cops were forced to retreat on more than one occasion.

As riot cops belatedly caught up with the action, the Bloc made a timely re-entry into the main TUC march, where police were unwilling to follow.

More attacks on banks, and the Ritz hotel, followed - to the general approval of the mainstream anti-cuts protesters.

The successful day of high-profile action was only marred by the uninspiring behaviour of those sheep-like protesters who failed to express any anger at all at the neoliberal assault on their communities.

Right-wing newspaper The Mail on Sunday reported: "Splinter groups broke off from the main body of more than 250,000 demonstrators marching from Victoria Embankment to Hyde Park to launch an assault on the capital’s main shopping district.

"Some were hellbent on storming – or destroying – any London landmarks synonymous with luxury or money. Others targeted companies associated with tax avoidance.

"Hundreds laid siege to The Ritz hotel, attacking it with paint and smokebombs. A Porsche showroom was also smashed up and upmarket department store Fortnum & Mason was occupied by about 1,000 activists.

"On the streets outside, anarchists battled police. Some officers in Oxford Street were attacked with lightbulbs filled with ammonia, a sinister new weapon that can be assembled by following simple instructions on the internet. Other officers were hit with paint and flying bottles."