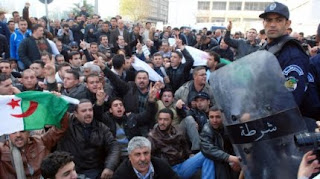 TREMORS from the Egypitan Revolution have already started to shake repressive regimes in Algeria and Yemen.

Reports The Guardian: "Algerian police have beaten back around 2,000 demonstrators who tried to rally in central Algiers as aftershocks from the Egyptian revolution rumbled throughout the Middle East.

"Demonstrations in Algiers quickly turned to running clashes with police who had been ordered by the government of President Abdelaziz Bouteflika to enforce a protests ban.

"Police took up positions throughout the centre of the city hours after the tumultuous scenes in Cairo, which are likely to have significant ramifications across the region.

"Even before Egypt's Hosni Mubarak had stepped down, the 12-year regime of Bouteflika had been considered to be under most threat from the popular uprisings now galvanising the Arab states.

"Wedged alongside Tunisia, where President Zine al-Abidine Ben Ali was ousted 30 days ago, and near Egypt, which fell on Friday, the unstable nation has many of the characteristics of both – a disenfranchised youth and rising prices of basic goods, such as sugar and cooking oil.

"It also shares a large, pervasive security presence, authoritarian rule and a general sense that citizens are not benefiting from its wealth and resources.

"Late in the afternoon, protesters briefly broke a cordon and officials say that 400 were arrested by police – who vastly outnumbered them. Most were then released.

"The demonstrations were organised, as they were in Yemen, nearly 3,000 miles away, where at least 5,000 people, mainly youths, rallied in the capital, Sana'a to call for Egypt-style reform."
Posted by The Vast Minority at 01:47