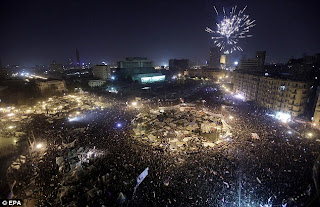 SOMETHING "powerful" has manifested itself on the streets of Egypt and Tunisia, says anarchist blogger Paul Cudenec.

He writes: "We are seeing the crackling of a revolutionary energy, an electric field of courageous defiance rising up from a new generation of human beings whose spirit has not yet been dulled and crushed by decades of miserable subservience.

"This was the ‘Wahn’ described by the great German anarchist Gustav Landauer, who explained: 'Wahn is not only every goal, every ideal, every belief in a sense of purpose of life and the world: Wahn is every banner followed by mankind; every drumbeat leading mankind into danger; every alliance that unites mankind and creates from a sum of individuals a new structure, an organism.'

"There is no reason to think that the effects of this Wahn will be confined to the Arab world, even though the more immediate ramifications are likely to be felt in that region.

"While the positive energy created by the Tunisian uprising was enough to inspire thre rest of North Africa, the resonance from the February 11 revolution is so powerful it will be felt all across the world.

"Every subsequent uprising will simply charge up the atmosphere still further and encourage us all to believe that anything really is possible."
Posted by The Vast Minority at 01:54