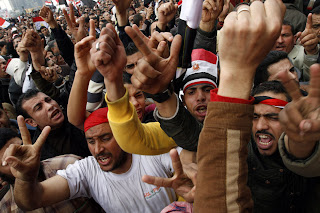 THE MUBARAK regime’s dirty tricks will result in its own destruction, says an in-depth analysis on a blog dedicated to the Egyptian uprising.

Abdel-Rahman Hussein examines all the ways in which the state has so far tried to halt the revolutionary tide - brutality, shutting down the internet, withdrawing police, deploying state thugs, spreading lies on state TV etc etc.

He writes: "What arose from that State TV propaganda – masterminded by Information Minister Anas El-Fiqi – can only be described as a disgusting witch-hunt of journalists and foreigners in Egypt that led to the stabbing of Greek and Swedish photographers, and neighborhood watches suspecting even Egyptians of being foreigners and therefore in need of detainment.

"A girl who claimed that she was an activist who was trained by Israelis and Americans in Qatar to create chaos in Egypt aired on Mehwar TV in pixilated glory turned out to be a reporter for the newspaper '24 Hours' who had fabricated the story and has now been suspended.

State TV presenter Hala Fahmy resigned her post and headed to Tahrir Square, not before telling Al-Jazeera that El-Fiqi was personally involved with the thugs who attacked Tahrir Square on Wednesday Feb 2."

Says the author: "Not that it was ever the most benign of regimes at the best of times, with a brutal human rights record and a curtailing of personal and civil liberties the norm.

"However, the scandalously dirty tricks put into play since Jan 25th would spell the end of any government in any country in the world. The fact that it hasn’t so far in Egypt is an indictment of the spineless attitude of the international community towards their strongman Mubarak."
Posted by The Vast Minority at 23:27