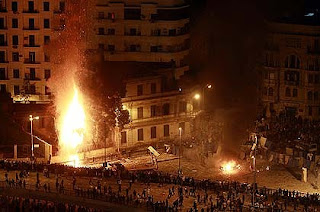 THE EGYPTIAN revolution remains on a knife edge as the Mubarak regime sends its thugs in to attack protesters.

Although corporate media have tried to classify the violence as clashes between 'rival groups of protesters', this is clearly untrue.

Eye-witness reports on Al Ajzeera describe how thugs captured by revolutionaries in Tahrir Square have been found to have police ID.

A useful new blog on the Egyptian uprising explains the role of the notorious Baltagayyah.

It says: "Loosely translated to 'thugs', Blatagayyah are more than just your run of the mill voyous.

"The word has a special relevance for just about everyone in Egypt: that of the paid paramilitaries of the Egyptian state.

"There are a lot of these fuckers, and they are the prime agents provocateurs of the Egyptian state. Conspiratorial stories of security services actually perpetrating looting, attacking peaceful protestors, or destroying property, too often turn out to be true.

"Many have been apprehended by ordinary citizens who have discovered state security IDs on them (they appear to have been ordered to carry such IDs in case they are stopped by the army).

"Let’s get this straight, this is not the worry about a few bad seeds on the murky fringes of the para-state. The Mubarak regime has maintained a concerted policy of introducing plainclothes thugs into protest situations, sometimes armed with weapons, but always with the impunity to violently quash even the slightest dissent (and the presence of these baltagayyah is inevitably in addition to the obscene amount of uniformed security officers the government will usually deploy to any demonstration, no matter how small).

"It’s not always certain whether these thugs are full time employees of the regime or simply bored individuals with a penchant for violence and a hankering for a few extra bucks and a chicken sandwich in exchange for a day’s work of beating the hell out of some demonstrators.

"What is certain is that rarely does any political protest or demonstration go down in Cairo without a healthy dose of baltagayyah violence.

"As far as the current protests in Egypt are concerned, we’ve seen them setting fire to cars, destroying small businesses, terrorizing protestors and ordinary citizens alike and looting neighborhoods.

"All this while disguised as 'ordinary Egyptians'. This has been enough to confuse and distort much of the international reporting of protest events.

"What must be understood is that the baltagayyah are sowing fear and violence to deliberately frighten and terrorize ordinary people.

"They work by making Egyptians and the outside world question who is perpetrating this violence, but this gruesome charade must be known and publicized because the only result of such fear and doubt is further violence against demonstrators."
Posted by The Vast Minority at 23:27