Disgust as police get away with G20 killing 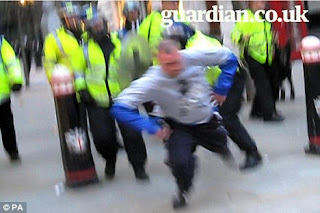 A WAVE of anger and disgust has swept the UK after the authorities announced there would be no prosecution of the policeman responsible for Ian Tomlinson during the 2009 G20 protests in London.

Police originally lied, claiming the newspaper vendor had suffered a heart attack after being caught up in a demonstrating crowd, but video footage emerged clearly showing him being hit by a baton wielded by PC Simon Harwood and pushed to the ground.

Now, 16 months later, the Crown Prosecution Service has announced that there is not enough evidence for a conviction for anything other than common assault, for which the time limit has conveniently expired.

Deborah Coles, of Inquest, called for an inquiry into the actions of all the public bodies involved in the case, reported The Independent.

She said: "The eyes of the world will be looking on with incredulity as yet again a police officer is not facing any criminal charges after what is one of the most clear cut and graphic examples of police violence that has led to death.

"This decision is a shameful indictment of the way police criminality is investigated and demonstrates a culture of impunity when police officers break the law."

The verdict from the public was overwhelming, as witnessed not only by the 1,000 plus comments in The Guardian and on Twitter, but on mainstream media websites.

For instance, one comment on Sky News stated: "OMG! A man commits a criminal offence, it's caught on camera, a man dies, another man is under review for being incompetent at his job, 15 months pass by and at the end of all that the cops decided no one is reponsible for anything! Here's me a week or so ago wondering how idiots can support Mr Moat."

Wrote another: "This is an absolute disgrace! Had it been the other way round, and it had been the copper pushed to the ground, only to die minutes later, you can bet your life the book would have been thrown at the one doing the pushing. Another nail in the coffin that is justice in this pathetic excuse for a country."

A reader of London's Evening Standard commented: "Placing the Police above the law shows why there is such contempt for them. If you start with the basics, there is a clear case for common assault, if it had been the other way around, who would be in jail at the moment?

"The Police are no longer servants of the People, but are instead the instruments of control of an Authoritarian State."

Added a Daily Mail reader: "All this does is undermine public opinion to an even lower level, I never thought I would fear the police as I do now. No longer public servants but licensed thugs that can literally get away with murder."

The announcement came five years to the day after the police shot dead innocent Brazilian electrician Jean Charles de Menezes on the London tube - a crime they also got away with.