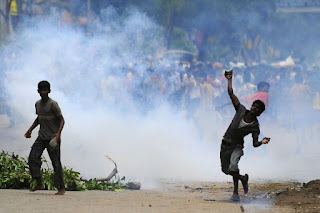 THE brutal reality of life for the Bangladeshi workers who make cheap clothes for Britain's high streets was exposed yesterday, reports the Daily Record.

It says: "Thousands of them took to the streets of the capital, Dhaka, yesterday to demand a rise in wages as low as £9 a month - only to be met by burly riot cops with batons.

"The police targeted kids caught up in the violence. One cop swung his baton at a tiny child, towering over his victim as the boy crouched in terror.

"And another viciously kicked another skinny urchin while the youngster lay screaming on the ground.

"More than 15,000 workers joined the protests, said to have begun after a boss beat up a female employee.

"The trouble spread to dozens of factories and the cops hit back with water cannon and tear gas as the demonstrators blocked roads. Witnesses said at least 30 people, including 10 policemen, were injured.

"Dhaka's deputy police commissioner, Salim Jahangir, said: 'There are 15,000 to 20,000 workers massing in the street. All workers in the area have walked out'.

"But the official minimum monthly wage is just £17. Many bosses ignore it, and the charity War On Want say some workers get only £9. Workers' leaders claim many women are forced to work 16 hours a day, then wait up to two months to be paid."