TSG are 'shock troops of repression' 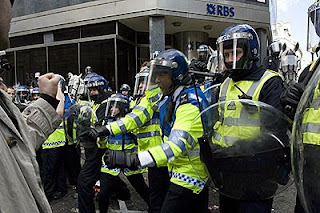 THE POLICE unit that killed Ian Tomlinson are "the shock troops of repression" and effectively immune from prosecution.

That is the conclusion of an article by the weekly direct action newsletter SchNEWS following the shock news that no charges are to be made over the 2009 G20 protest death in London.

States the article: "As SchNEWS has witnessed, this kind of casual dishing out of violence is completely normal for police in this situation - but not always seen by millions on film.

"The G20 protests were deliberately corralled in a ‘kettle ‘ around the Bank of England. As the day wore on the police became increasingly violent. What happened to Ian was, apart from its tragic consequences, an experience shared by many.

"Immediately after the news of Tomlinson’s death surfaced the Met’s PR machine whirred into motion. We were told by a dutiful mainstream press that a man who had had no violent contact with cops had died of a heart attack while officers attempted to resuscitate him.

"Lies were spread that these life-saving public servants were under a hail of bottles hurled by a filthy anarchist mob. Despite the fact that the media should have learned their lesson during the Menezes affair (see SchNEWS 508, 552, 647), once again they reported the lies verbatim.

" The cop who struck Tomlinson and pushed him over has now been named as PC Simon Harwood, part of the Met’s Territorial Support Group (TSG).

"This is a specialised forced entry and public order unit of the Metropolitan Police – created the day after the notorious Special Patrol Group was disbanded in the wake of the death of Blair Peach, another man clubbed to death for being on the wrong demo at the wrong time, this time in 1979. The inquiry into his death has never been made public.

"The TSG has gained its own share of infamy as the most macho and aggressive section of the most macho and aggressive police force in the UK. This is the same outfit that Sgt Delroy Smellie belongs to, caught on camera striking out at Nicola Fisher who was brandishing a carton of orange juice at the time. (http://news.bbc.co.uk/1/hi/uk/8597812.stm ).

"It is clear that the casual use of violence is endemic in the unit and others like it. A total of 283 TSG officers had been investigated over 547 allegations of misconduct during the year 2008-09.

"Of these, 159 allegations were of assault. It is of course extremely useful to those in power to have at their disposal these shock troops of repression, and for them to be effective they must be guaranteed immunity from prosecution."