US financial attack on Greece and Euro? 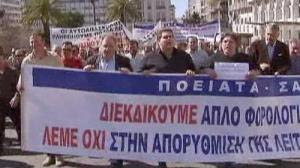 THE global bankers today turned the screws even harder on the people of Greece, bringing the country closer to revolution - or brutal dictatorship.
The Greek state agreed to yet more 'austerity' measures, as demanded by the international puppet-masters, to be imposed on the population, despite massive opposition.
And at the same time it was claimed that the failure of the Greek economy could be the result of a deliberate attack on the Euro by American bankers.
Says a report on RT: "With Greece reportedly set to announce stringent measures to offset its crippling financial crisis, are US financial forces working behind scenes against the euro?
"According to a recent report in The Wall Street Journal, the US Justice Department has launched an investigation into whether hedge funds – which include SAC Capital Advisors LP, Greenlight Capital Inc., Soros Fund Management LLC and Paulson and Co – banded together to drive down the value of euro.
"The Wall Street Journal article reported a precipitous rise in large 'short' positions being taken against the euro in recent weeks by the major hedge funds, who were said to have gathered behind closed doors to discuss their strategy. 'It is an attempt to create a new world monetary crisis. It is economic warfare to defend the dollar by attacking Greece and through Greece attacking the euro,' journalist Webster Tarpley told RT.
"Investigators may consider whether such information sharing should be considered “collusion,” the Journal suggested.
"In the meantime, crowds of people have taken to the streets in Athens to protest against job losses and salary cuts."
Posted by The Vast Minority at 09:28