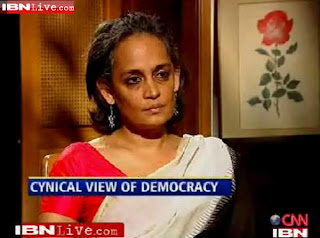 A SUPERB first-hand account of the strengthening Naxalite uprising in India by author Arundhati Roy has been published by The Guardian.

The report, which includes a video, is a rare piece of UK publicity for the struggle of the tribal people and guerrillas who have taken up arms against the Indian state.

Explaining the background, Roy says: "The Indian constitution, the moral underpinning of Indian democracy, was adopted by parliament in 1950.

"It was a tragic day for tribal people. The constitution ratified colonial policy and made the state custodian of tribal homelands.

"Overnight, it turned the entire tribal population into squatters on their own land. It denied them their traditional rights to forest produce. It criminalised a whole way of life. In exchange for the right to vote, it snatched away their right to livelihood and dignity.

"Having dispossessed them and pushed them into a downward spiral of indigence, in a cruel sleight of hand the government began to use their own penury against them.

"Each time it needed to displace a large population – for dams, irrigation projects, mines – it talked of 'bringing tribals into the mainstream' or of giving them 'the fruits of modern development'.

"Of the tens of millions of internally displaced people (more than 30 million by big dams alone) – refugees of India's 'progress' – the great majority are tribal people. When the government begins to talk of tribal welfare, it's time to worry.

"Over the past five years or so, the governments of Chhattisgarh, Jharkhand, Orissa and West Bengal have signed hundreds of memorandums of understanding – all of them secret – with corporate houses worth several billion dollars, for steel plants, sponge-iron factories, power plants, aluminum refineries, dams and mines. In order for the MOUs to translate into real money, tribal people must be moved. Therefore, this war."
Posted by The Vast Minority at 12:53